From disposable plastic pens that cost mere pence to high-tech pens that link paper notepads to apps, the pen has changed immensely over the years. And as touchscreen technology becomes increasingly popular, the stylus has become the gadget fan’s alternative to the traditional pen.

But while, styluses and pens with on-board gadgetry are popular, the traditional pen isn’t dead yet – far from it. High-end pens are still considered to be a status symbol, which is perhaps no surprise considering their long and productive history.

History of the pen

As with many inventions, pens can be traced back to the ancient Egyptians who forged reed pens from sea rushes to write on papyrus scrolls. Meanwhile, styluses crafted from reeds were first used by the ancient Mesopotamians to ‘write’ on clay tablets.

Reed pens were gradually replaced by feather quills around the 7th Century and quill pens were also famously used to produce some of the Dead Sea Scrolls.

Pens with metal nibs weren’t mass produced until the 1800s although they had first been used long before, with a copper nib reportedly found in the ruins at Pompeii. 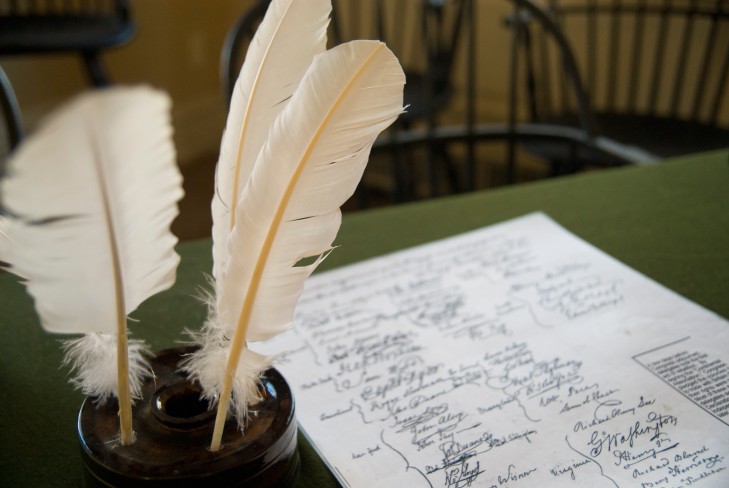 Romanian student Petrache Poenaru invented the fountain pen which was patented by the French government in 1827, while the first patent for a ballpoint pen was issued in 1888.

Hungarian newspaper editor László Bíró, whose named has since become synonymous with pens, first filed a patent in 1938. Felt-tipped pen was invented in the 1960s in Japan, while rollerball pens in followed in the 1970s.

What makes a good pen?

There’s no one answer to the question ‘what makes a good pen’, simply because there are several different types – the most traditional variants are the ballpoint, rollerball, fountain and marker pens. However, the Parker Pen Company attempts to sum it up, explaining that:

“A good pen is a mark of quality and style – unrivalled aesthetics, technical innovation and the care of advanced and skilled craftsmanship are all key factors when qualifying the ideal pen.

“The most important element in the making of a pen is its ‘engine,’ which includes the finely sharpened nib and its ink feed system regulating the flow of the ink.”

Many people prefer using fountain pens as they require no pressure to write, unlike ballpoints.

Pens are generally made from either a lightweight metal or plastic and while the former is more robust, it’s also heavier on the hand. Nibs can be made from a variety of materials from steel to gold and titanium.

Even before touchscreen styluses emerged, there has always been plenty of innovation when it comes to pens. In 1965, the Fisher Space Pen Company produced the first ‘zero gravity’ pen, designed to work in space, under water, on wet paper and at any angle.

Fisher developed the pen independent of the space programme, but after NASA tested it in space, the US space administration reportedly bought up around 400 pens to use on the Apollo missions. Legend has it that the Soviets simply used a pencil.

You can read the rest of the article at The Huffington Post UK (originally published 10 December 2014).