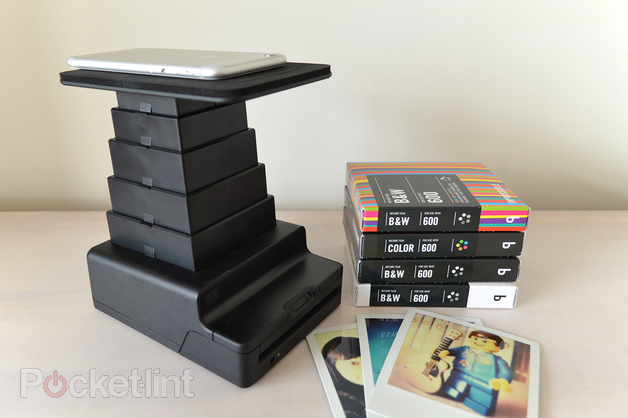 Unlike the rather disappointing Polaroid-branded Zink printers, the Instant Lab produces actual Polaroid-esque photographs. That’s because Impossible Project cleverly bought Polaroid’s remaining factory a few years ago in order to manufacture its own film, which is designed to work with vintage Polaroid cameras and, of course, the Instant Lab Universal.

The original Instant Lab was launched in 2013, but only worked with the iPhone 4, 5, 5S and iPod touch. The new Universal model, however, is designed to work with more devices thanks to new “touch location technology”. This means it supports phones from Samsung, HTC and Google (Nexus), as well as the iPad. Screens need to be high-res (approximately 300ppi) and run on Android 4.0.3 (Ice Cream Sandwich) or above.

We’ve unleashed our inner hipster and have been testing the Lab using an iPhone 6, iPad Air 2 and the HTC One M8. It’s a lot of fun, like a big kid’s toy.

The Lab Universal sports a simple yet functional design, with a sturdy metal base along with a plastic bellows-style extendable turret with a phone cradle on top. The only controls you’ll find are the latch for opening the film bay door at the bottom – where the film cartridges can be easily slipped in – along with an eject button to pop out the exposed photo.

To the top are three sensors on the cradle – representing the touch location technology part of things – used to detect when a phone is placed there. For larger devices, such as an iPad, these act as essential points to communicate with the app and let it know which portion of the screen is in play, then re-adjust the photo’s placement on screen so the Lab can make a duplicate exposure of it.

A removable adaptor can be used with iPhones 4/4S/5/5S/5C, but for Android devices not everything is compatible just yet. The brand new HTC One M9 is one such unsupported example (we did try it out, but it was a no go). Check with Impossible Project for compatibility prior to purchase if you’re concerned.

You can read the rest of the article at Pocket-lint.com (originally published 25 March 2015).