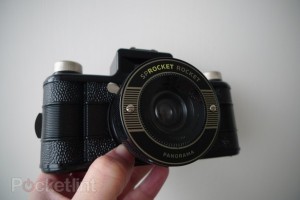 Analogue camera maker Lomography (or Lomo, to those in the know) has been driving the public’s desire for retro cameras for a while now. Following on from the sucess of its first product (the LC-A+) and it’s popular Diana F+ and Diana Mini models, the brand has introduced the Sprocket Rocket.

The latest addition to Lomo’s fast-expanding lineup of analogue snappers, the new model uses an extra-wide lens to capture panoramic shots and, as the name suggests, the camera uses the full size of the film including the sprocket holes and numbering at the edge. The additon of a rewind dial makes it possible for you to wind the film backwards as well as forwards between frames in order to get some really interesting effects. We recently reviewed the Lomo 360 Spinner – a 360-degree panoramic camera. While it’s a great piece of kit, it is slightly bulky and cumbersome, while the newer Sprocket Rocket offers panoramic pictures (albeit not full 360-degrees) in a much more compact product.

Some models in the Lomo range use 120mm film that’s notoriously hard to track down, unless you’re lucky enough to live near one of the Lomo stores. Thankfully, the Sprocket Rocket uses conventional 35mm variety that can be picked up easily from anywhere that sells camera film, such as the chemist. If you’re used to the simplicity of popping an SD card into your digital camera, then the idea of loading a film might sound mildly scary, not to mention ridiculously old-fashioned. Rest assured that getting your film in place is absolute child’s play on the Sprocket Rocket. All you need to do is remove the back door of the camera, lift the winding knob, pop the film in, attach to the take-up spool on the right and wind on slightly to make sure it’s firmly attached. If you follow the enclosed instructions, then you really can’t go wrong.

The camera itself is a thing of beauty, with its stylish black finish and 1940s styling, its looks like something out of a spy film or a Dick Tracy comic. Although predominantly plastic, the camera’s chassis is reassuringly sturdy, and certainly more robust that some of the brand’s cheaper models such as the Diana Mini.

You can read the rest of the article here on Pocket-lint.com (originally published 29/12/10).