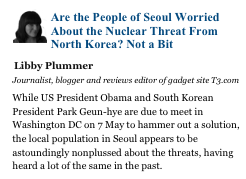 Going on a press trip to Seoul just days after North Korean autocrat Kim Jong-Un threatened to carry out nuclear attacks on South Korea, Japan and the US wasn’t exactly ideal timing.

But after bombarding the poor PR company in charge of the trip with a barrage of questions, placating worried parents and notifying the Foreign and Commonwealth Office of my travel plans, I flew out to Gangnam with a group of UK tech journalists.

While spending much of our time checking out LG’s latest innovations and being shown the sights of Seoul, it was hard to ignore the heightened tensions with the neighbour state.

The annual military exercises that take place between the US and South Korean forces around this time always tend to raise tensions, with North Korea viewing the training drills as a practice run for invasion.

However, this year the verbal response from the north of the peninsula has stepped up a gear, with a “state of war” being declared.

It was feared that North Korea may take the 101st birthday of the founding father Kim Il Sung as an opportunity for its threatened missile launch or perhaps something more sinister. However, the anniversary came and went without incident, except for some isolated protests in Seoul where South Korean activists burnt effigies of the Kim family in the streets.

With Seoul only an hour or two’s drive away from the border, are the inhabitants of the densely populated metropolis worried about an imminent nuclear missile strike from their neighbours? Not a bit, it would seem.

Obviously it would be unwise for the South Korean government to ignore the rhetoric from Pyongyang, with defence minister Kim Kwan-Jin stating that Seoul is fully prepared for an attack. However, while the authorities are acting with due caution, the general population of Seoul appears to be paying the young despot’s threats very little heed indeed.

It would probably be fair to say that the news of YouTube sensation Psy’s follow-up single to Gangnam Style has generated more buzz here than the bellicose threats from the fledgling dictator. You can hear the Korean rapper’s work being played constantly in bars and shops across the city and we were also treated to his new video several times by our hosts. There are even Gangnam Style socks for sale in the tourist-trap souvenir shops (yes, reader, I bought them).

Questions about the current tensions on the peninsula are generally met by the locals with a friendly chuckle and a reassurance that we’ll be perfectly safe.

While US President Obama and South Korean President Park Geun-hye are due to meet in Washington DC on 7 May to hammer out a solution, the local population in Seoul appears to be astoundingly nonplussed about the threats, having heard a lot of the same in the past.

On the streets of Seoul, no one is talking about war or looking for bomb shelters. Armageddon, Koreans believe, is not at hand. The mood is all for peace and dialogue. The question remains where, how, on what terms and to what end.

Kirk hits the nail on the head. The city is as busy as you’d expect a bustling conurbation to be. In fact, many of the streets are currently lined with strings of colourful lanterns to celebrate the 2,576th birthday of Buddha on 17 May while the blooming cherry blossom trees add an extra dash of defiant cheerfulness.

Tourist hotspots, such as Gyeongbokgung Palace are still very busy, although, most of the tourists there appear to be Korean and Chinese, with very few Westerners around. We were told that foreign visitor numbers are down since last year, most likely as a result of the ongoing tensions.

City nightlife still appears to be in full swing, although US soldiers stationed in South Korea are currently on curfew, cutting the number of Westerners out on the streets late at night.

There is no visible military presence in central Seoul at all, although we did spot a lone army helicopter hovering above the city. It wasn’t until we ventured to Paju, just 16km from the border that we spotted soldiers at a South Korean army base. Most of the tiny guard huts running along the length of the border appeared to be empty – we only spotted one that was manned.

Our tour guide compared the country’s current situation to that in Germany before the fall of the Berlin Wall – in the sense of a country temporarily divided. Rather than concentrating on the current tensions and expecting another Korean war, there is much talk of inevitable reunification in the not-too-distant future.

In the meantime, the good folk of Seoul carry on with their daily lives. Maybe if Kim Jong-Un uploaded a record-breaking YouTube video with a memorable dance routine, they’d take more notice of his increasingly desperate attempts to cement his place in history.

This article was originally published on 22 April 2013 on The Huffington Post UK.