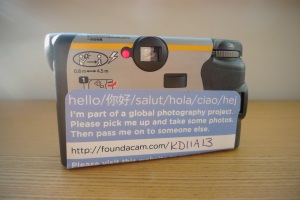 When the nice folk at Kodak asked if I wanted to get involved with the Disposable Memory Project, I jumped at the chance, given that I’m a huge fan of film photography. The Kodak chaps recently provided me with some disposable cameras for a feature where I spent seven days working only with film  – no digital allowed – so I was keen to get stuck in once again.

Established in April 2008, the Disposable Memory Project is a “global photography experiment” where throwaway cameras are passed on to others or left in public locations around the world.

Each camera includes a message urging the finder to take a few pictures and then pass the snapper on. There are also instructions on where to return the camera to when the film is finished.

More than 350 camera have been released already and you can see the results from those that have made it safely home over at the Project’s website. So far, more than 70 countries have been visited, with the cameras racking up over 440,000 miles of travel between them.

My Kodak Ultra single-use camera started its journey in South London and spent a short time travelling around the Big Smoke before jetting off to Washington D.C in the US of A, courtesy of my mum. From there, who knows where it will end up. You can follow its progress on its own little tracking page.

If the Disposable Memory Project sounds like your kind of bag, then you can get involved yourself by contacting the chaps in charge or follow the Twitter feed on @foundacam.